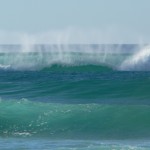 With hash tags like ‘#worldsoceanday’ and ‘ #waveforchange’ trending on twitter it didn’t take me long to figure out that yesterday was World Oceans Day – a global observation to honor the largest water bodies and take time to appreciate the role oceans play in maintaining the ecological balance. The day also celebrates the products that the oceans provide us and raises awareness about the impact of human activities like overconsumption and pollution on these massive water bodies.

World Oceans Day was first proposed by the Government of Canada at the Earth Summit in Rio de Janeiro in 1992. In December 2008, the United Nations General Assembly passed a resolution to officially recognize June 8th of each year as the World Oceans Day.

As per the UN Facts and Figures, Oceans cover three quarters of the Earth’s surface and contain 97 percent of the Earth’s water. They are home to millions of species and absorb 30% of the carbon dioxide produced by humans, thus decreasing global warming. Marine fisheries employ about 200 million people and over three billion people depend on marine and coastal biodiversity for their livelihoods.

Additionally, oceans generate most of the oxygen we breathe, feed us, provide a route for transportation and even regulate the climate. They truly are a lifeline for humanity and need careful management in order continue sustenance of life on earth.

There are various ways that you can make small contributions most of which revolve around spreading the word.

1) Raise awareness through word of mouth. Talk to your peers about the importance of oceans and the role they play in making earth habitable.

3) Saving water and following proper waste disposal methods are other minor ways that contribute to the overall picture.